Dior’s Cruise 2020 show was hosted at the magnificent El Badi Palace, Marrakech in Morocco and the theme of the show was “common ground” – a celebration of different cultures coming together to co-create and find common ground.

“Maria Grazia Chiuri has always had her heart set on establishing creative exchanges with African cultures,” Dior explained. “With this collection, she sought to dialogue with the real and imagined landscape of Morocco, at the crossroads of the Mediterranean, Europe and Africa, as a dream destination for artists, poets, writers and eternal adventurers.”

We are all aware of Christian Dior’s rich history with the continent. Dior’s former creative director Yves Saint Laurent’s fascination with Morocco was another known fact. This collection uses the craftsmanship of the continent.

Grazia Chiuri also asked Pathe? Oue?draogo – AKA Pathe?’O, one of Africa’s leading designers – to create a special shirt for the collection, which pays tribute to the late president of South Africa, Nelson Mandela.

She also collaborated with Grace Wales Bonner and Mickalene Thomas, asking them to reinterpret through their combined creative vision an icon of the New Look, the Bar jacket and a skirt.

‘With this collection, she sought to have a dialogue with the real and imagined landscape of Morocco, at the crossroads of the Mediterranean, Europe and Africa, as a dream destination for artists, poets, writers and eternal adventurers’

The runway was lit with candles everywhere – with lamps floating on the water surface, it perfectly set the ambience of a golden era. Each outfit, a work of art-embellished with fine embroidery, using a lot of see thru white and black tissue fabrics, plain, printed or embroidered- It was a blend of classic cultural styles and neutral colours, assembling a very wearable collection. It was a culture appreciation runway rather than a culture appropriate one. The designer brought light to a variety of cultures through the magnificent collection. 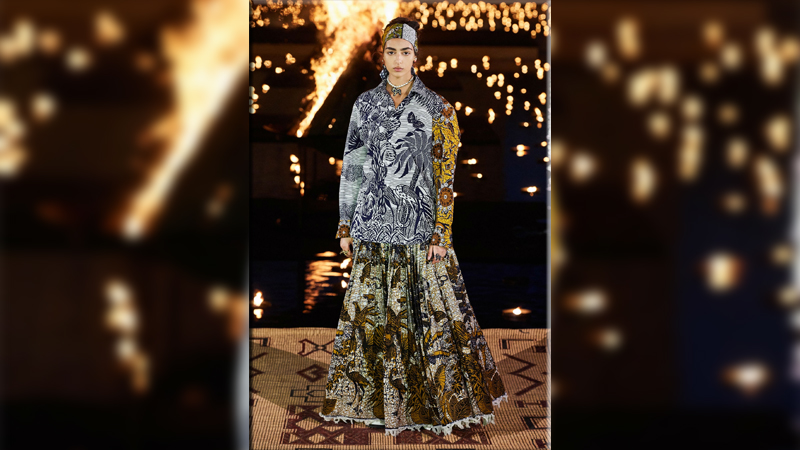 Built in the 16th Century, El Badi Palace in Morocco is considered a Jewel of Islamic Architecture. Resorted to its original splendour, the site boasts over 300 richly decorated rooms, a vast courtyard, central pool and lush gardens.

Long dresses, front open long coats and tunics were a common sight at the show. Very African styles of wearable tops and embellishments were the highlight. The graceful black numbers were a favourite. A hint of bright trimmings or details added an extra appeal to the subtle row of neutral hues.

Staying true to the theme, models that walked the ramp were all selected from different cultures and ethnicities, making the whole Dior Cruise experience a treat for the soul. The designer also teamed up with Sumano, an association that aims to revive the traditional women’s crafts of Moroccan tribes, including painting on pottery, the art of weaving and vegetable dyeing.

The writer can be reached at zarimua@gmail.com

Vennu Mallesh – It's My Life What Ever I Wanna Do

Coronavirus: ‘No evidence that face masks protect people who are not sick’

Ranveer Singh says he is devastated to witness what is happening in this unprecedented coronavirus pandemic : Bollywood News
2020-05-26